New Musical Director David Hume has a long history with the Oxford Millennium Orchestra, having first joined them in 2009 as a violinist. Since then, he has cheerfully spent the majority of his OMO playing career either hidden at the back of the second violins, nervously waiting to play the bass drum, or trying to explain the charms of the two compositions which the orchestra commissioned him to write.
David’s conducting life began, out of necessity, with regular appearances as a guest conductor of the Merton College Orchestra, the St. Anne’s and St. John’s Orchestra (SASJO), and the Oxford Open Orchestra. David was also the musical director of the Corpus String Orchestra for a year, conducting highlights of the string repertoire from the Tchaikovsky Serenade for Strings to Bernard Hermann’s Suite to Psycho, from Bach’s Brandenburg Concerto No.4 to a world première of a new work by Rachel Lewzey.
David originally came to Oxford to complete a D.Phil. and has recently returned to Oxford as a Research Fellow in the Department of Mathematics, where he drinks coffee, teaches, and writes about symmetries. 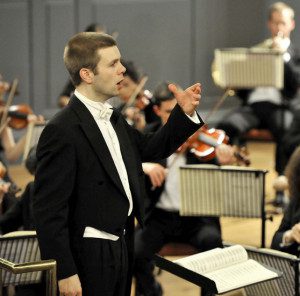 David served as Musical Director of the Oxford Millennium Orchestra for 8 years, 24 terms and 42 concerts.  Before that he had been principal oboe, second oboe, third oboe, and sometime percussionist in the orchestra. OMO brought David’s conducting tally of Oxford ensembles to eight having had successes in the conducting competitions of the University Wind Orchestra twice and the Oxford University Philharmonia, and he was the founding conductor of the Univ. Wind Dectet, and the Graduate Philharmonia of Oxford (G.Phil. Oxon.).

David arrived to read Engineering Science as an undergraduate and Tenor Choral Scholar at University College in 2004; subsequently he was offered a place to continue his studies to work for a D.Phil. in Biomedical Engineering. Still not bored of Oxford, Dave moved to work as a Post-Doctoral Research Assistant in the Dept. of Physiology.  During these years he also held College Lecturererships in Engineering Science for New and Keble Colleges.

OMO’s traditions continued with David in charge, with performances always in the Sheldonian Theatre, regular use of the Oxford musical talent for concerto soloists, and summer tours to Europe.  David also inherited the van-driving duties seemingly assigned to Musical Director despite OMO travelling to its furthest ever destinations in July 2011, to Porto, and to Budapest in 2012.

Charlie has a colourful and varied conducting history with a range of orchestras in Oxford. During his tenure OMO maintained its somewhat unique position in Oxford, attracting high quality players from the Universities and the city community, performing major romantic works, new commissions and unconventional repertoire, and touring to Europe every summer. The orchestra visited Krakow, Barcelona, Amsterdam, and Ljubljana. The orchestra also played at the Magdalen College Commemoration Ball, culminating in a spectacular performance of Tchaikovsky’s 1812 overture to accompanying programmed fireworks.

He is a horn player by training, and was previously the principal horn of OMO. During 10 years in Oxford he has probably conducted or played horn in more than 450 concerts and shows, with all of the University and most College ensembles, and anyone else who will have him. He has also worked his way through most of the interesting jobs in Oxford music, including President of the Oxford University Music Society.

Charlie came to the end of a postdoctoral research fellowship at the Department of Experimental Psychology, and left Oxford to pursue his research in Lyon. He had also been known to moonlight as a Lecturer in Experimental Psychology at Balliol and St Catherine’s Colleges. His research is into the brain systems underlying memory, and the role of the interaction between different regions of the brain (http://www.sbri.fr/members/charlie-wilson.html).

Nicholas was the Principal Conductor of the Oxford Millennium Orchestra from 2000 to 2005. During his tenure with OMO he conducted much of the major symphonic repertoire, and worked with many soloists including Jonathan Darnborough, Stuart Baran and Charlie Wilson. He also organised four highly successful summer concert tours to France, Switzerland, the Czech Republic and Germany.

He has studied conducting and organ under Dr Christopher Tinker, attended conducting classes with Dr Marios Papadopoulos, studied piano under Jonathan Darnborough and attended classes with Norma Fisher. In 2003 he was appointed as the first Conducting Apprentice at the Berkshire (USA) Choral Festival, held at Canterbury Cathedral.

Nicholas Mumby is now the Principal Conductor and Director of Music for the Oxford Spezzati Soloists & Orchestra (http://www.spezzati.com/about/nicholas-mumby). He graduated with a degree in Classics in 2003 from Exeter College, Oxford, where he was also an Academical Clerk. He is a qualified lawyer and currently works as an associate solicitor in the commercial property department at Shearman & Sterling.

Photographs of OMO by Paul Bullivant