The Oxford Millennium Orchestra has been fortunate to have worked with a number of outstanding musicians.

Magdalena Filipczak is anaward-winning Polish violinist described as ‘a musical chameleon, quickly getting under the skin of whatever she’s playing’ by the ARTS DESK. With her eclectic and extensive repertoire she has appeared as a soloist in many venues in the UK – including Wigmore Hall and St John’s Smith Square – and in Europe and the Americas. Her Carnegie Hall recital debut, scheduled for March 2020, has been postponed to the 2022/23 season due to the pandemic.

Magdalena’s “Essence of Violin” CD has been praised by Strad Magazine as ‘…glittering….beguiling…captivating…hauntingly atmospheric…’. Her recent CD recorded with Hungarian pianist Peter Frankl is in the final stage of postproduction.

Magdalena is a graduate of the Guildhall School in London, where she studied violin with Krzysztof Smietana and won the Max and Peggy Morgan Violin Concerto Prize amongst others. Upon graduating, she was awarded an Individual Artist’s Fellowship and also holds a prestigious Fellowship Award of CUNY Graduate Center in New York where she is a DMA in Performance candidate. Magdalena is an Adjunct Professor at the Aaron Copland School of Music (Queens College) in New York where she currently teaches remotely from London.

Magdalena played the ex-Ida Haendel Antonio Stradivari violin, kindly loaned to her by the John Porter Foundation through the Beare’s International Violin Society.

En Yuan Khong is in her final year at Jesus College, Oxford, reading German, while also studying violin with Felix Andrievsky. She started the violin with Katherine Loynes, and has also studied with Lutsia Ibragimova, Lorraine McAslan, Stephan Picard, and Thomas Brandis, spending her gap year in the Musikhochschule Lübeck.  She has participated in international master classes in Stratford-upon-Avon, Liechtenstein, Rostock, Hamburg and Weimar, under a German Academic Exchange Service scholarship and an MBF Geoffrey Shaw scholarship.  She was awarded an LRSM with Distinction in 2011, and was a string section finalist in the Royal Overseas League Competition, London 2012. She has also won numerous other prizes at the Junior Royal College of Music, and was a scholar at the Junior Royal Academy of Music.

En Yuan has given concerto performances with the Sound Collective Orchestra in London and with the Jenaer Philharmonie in Weimar. She has also performed as a soloist with the Oxford Philomusica in the Sheldonian Theatre. She has given solo and chamber music recitals at St Martin-in-the-Fields and other halls in London and Berlin, and played a solo recital at the Victoria Concert Hall, Singapore. En Yuan played with the European Union Youth Orchestra under Vladimir Ashkernazy in 2013. At Oxford, she led the Opera Studio Oxford Orchestra, played in the Turl Street Arts Festival, and writes on a range of subjects for Cherwell.

Naomi is a Medical student at St Hugh’s College, and studies violin with Gaby Lester. Whilst at school, Naomi performed as a soloist with the Southbank Sinfonia, Edinburgh Festival Orchestra, Grampian Concert Orchestra, and the Scottish Fiddle Orchestra. She has been a member of the National Youth Orchestra of Scotland, touring to China with their string ensemble in 2004. Following a move to Durham, she joined the National Youth Orchestra of Great Britain as a Principal player, as well as leading the Young Sinfonia at the Sage, Gateshead.

At Oxford, Naomi has led the Oxford University Orchestra, and in her first year won the Anna Haxworth prize for instrumental performance. In April 2013 she performed in a public masterclass with Maxim Vengerov. Naomi performed with the Oxford Millennium Orchestra in March 2014, playing Sibelius’ Violin Concerto. We were delighted to welcome Naomi back for our Michaelmas term concert 2014 to play Tchaikovsky’s Violin Concerto. 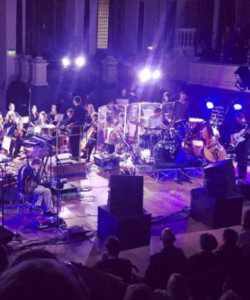 Stornoway is a British alternative indie folk band from the Cowley area of Oxford. It consists of singer, lyricist, and guitarist Brian Briggs; keyboard player Jon Ouin, bassist Oli Steadman and his brother Rob on drums.

Stornoway first performed with OMO in 2009, making them the first and only electric pop band to play in the Sheldonian Theatre. Five years on, a second concert was announced to mark the 350th anniversary of the Sheldonian. After extraordinary online ticket sales, Stornoway arranged a second concert. Both were sold out.